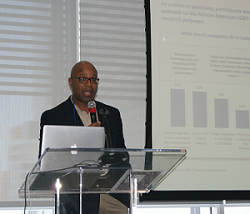 Community Marketing & Insights (CMI) has released a breakthrough report on the attitudes and consumer behaviors of over 2,000 African American / Black LGBT residents of the United States. The study, produced in partnership with the Center for Black Equity, focused on participants who interact with media, events and organizations representing the African American / Black LGBT community, especially Black Pride festivals.

The research report was presented on April 24th by Earl Fowlkes (see photo), President of the Center for Black Equity, during the 7th Annual LGBT Marketing Conference at the New York Times Conference Center. “This survey is a major break though for the African American/Black LGBT consumer market. We finally have data that provides insight on the African American/ Black LGBT purchasing power in the United States,” said Mr. Fowlkes.

A sample of key findings for African American LGBTs living in the United States:

To obtain a free copy of the report, please visit